The theme in this weeks Gallery is Sunshine.

Here in the UK the sun finally came out. We’ve been waiting a looooong time. We’ve had a lot of rain. It’s been cold and it felt like we were stuck in one, long unpleasant season.
Then the sun came out, the temperature’s soared and people dug their sandals out again. So to celebrate, this week’s photography theme is: Sunshine.

Baby Z is a December baby. It had been snowing for a whole week and snowed about 3 weeks afterwards. It then rained and was murky for the next few months which meant he didn’t actually see proper sun till he was about 6 months old. Every time the sun makes an appearance he is instantly taken to the park to soak up some rays. He’ll actually bypass the swings completely and head straight for the grass to do this… 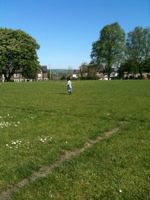 Run. Like mad, till he can’t run anymore. He’ll just keep running into the distance until he resembles a running dot.  Then stop and come running all the way back.  Then repeat it all over again!

Still, it’s his absolute favourite thing to do at the moment which beats trying to catch him throwing himself off the couch about 100 times a day.

I’ve been somewhat slack at blogging over the last week. The sun has taken a wrong turn somewhere in the world and ended up shining gloriously over the UK. Presumably being male, it hasn’t stopped to ask for directions. Whilst its stuck here, and before it finally gives in to Mrs. Suns nagging to ask for directions out of here, I have been shoving Baby Z outside constantly to soak up some Vitamin D. Complete with sun block of course. He’s been going positively mental with happiness running around. Although he doesn’t like the touch of grass on his hands. Once he tumbles onto it he can take a good few minutes to stand back up again as he outright refuses to use his hands to aid him. Imagine a baby mime artist trying to get up whilst pushing against imaginary glass. That’s him!

Anyhoo. What I meant to say was, before the sun came out I was going to blog about my cousins wedding. Last month I was at a cousins wedding and I learnt how to go to a wedding with a toddler. Most of my dresses still have the scars to show for it. Last week it was a close family wedding and this time I was going to be prepared. Oh yes I was. I was determined to yummy mummy my self through an entire week of weddingness.

It sort of worked. I emerged after a week of partying with only one destroyed dress, my nerves only slightly frayed and a Baby Z who, lucky for me, wanted his Daddy to carry him around for most of the week. Hooooray!

Which meant that, this time, I actually remember bits from the actual wedding itself. Like every wedding, there was the good, the bad and the jaw dropping just bizarre. Like…

The bit where you see your cousin for the first time as a bride and want to burst into tears. Partly because you can now turn on the waterworks at the click of your fingers at anything. And partly because you can’t believe the girl that feels like your baby sister is getting married.

The bit where the groom gets muddled during the civil ceremony about whether there’s one ring or two, declaring there’s definitely only one. Cue, the ring bearer freezing mid standing up and holding the extra ring up nervously. Everything then clicking into place and the ceremony proceeding as normal. Us, desperately wanting to shout “Surpriiiise!” from the back. I don’t blame him being muddled. She looked stunning!

Baby Z entertaining himself with the switch of a lamp during the entire ceremony. Thankfully everyone ignored what looked like weird morse code from one corner of the room.

The mystery man who did an entire rendition of Michael Jackson’s Bad during one of the dance parties. Complete with “jeans grabbing”, spinning, pointing; you get the drift. No-one seemed to know who he was but it was evident neither the bride nor the grooms side knew him. Some people just watched slightly stunned. Others wondered whether they should tap him on the shoulder mid dance and ask who the hell he was. Someone suggested maybe he was just a mystery dancer that went from party to party to do his moves.

Finding out at the end he was a plus one. He was greeted with whoops on every day after this. I think he was quite pleased.

Wanting to deck the bossy woman that was trying to usher my cousin out at lightning speed at the end of the wedding because the venue needed clearing by a certain time. It meant she didn’t get to say her goodbyes to a lot of people. (Obviously I would never deck her in real life. I did do a good job in my head though). As fate would have it, my cousin decided to go down to the ground floor in the lift seeing as her dress probably weighed as much as her. We all got to say our byes to her properly before realising the lift was actually broken. In your face bossy woman!

Spending the entire wedding periodically saying “ahh they’re so young. Are we old?” Then getting excited when the tea and biscuits started getting rolled out.

Promising the frazzled looking OH that he could do whatever he wanted the following weekend as he tried to stop Baby Z from escaping for the zillionth time.

Hovering around the sweetie table like a child, eating one too many and then repeating “I feel a bit sick”, a lot. Spotting astrobelts and going back for more.

Realising we actually are getting older and can’t handle consecutive late nights anymore.

Hoping the next family wedding won’t be for at least 6 months.

I am a finalist in the MADs blogging awards. This is the last week to vote! If you’d like to vote for me in the Best New Blog category then click below. Thank you!! 🙂 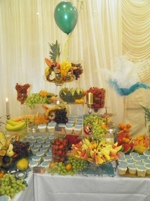 The theme in the 100th Gallery is Picture Postcard.

Here’s mine…it’s a journey I occasionally do on a very long windy road. It has trees surrounding the entire route and no lights so it’s very spooky at night. On this particular day the sun decided to make a rare appearance and the scene ahead of me just looked this. 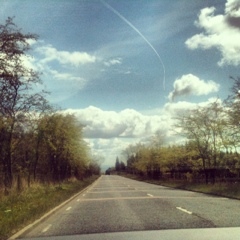 I know, I know, I’m pretty late with this one. I blame your Auntie S for having a 5 day wedding week!! I am so knackered and spent the whole day pretty much shuffling around and taking you to the park so that you could tire yourself out. I could have quite easily had a nap on the grass. But then I may have been mistaken for a hobo and that’s probably not too wise.

You had a spectacular time. You ran like I’ve never seen you run before. I’m pretty sure you must have run half a marathon over those 5 days. I’ll never know how you kept going but maybe one day you might be a long distance runner. Or something. And I don’t think anyone will forget the wedding ceremony, during a particularly serious prayer, you decided you would stand up and do your bum wiggle dance, in full view of everyone. You giggled as you were doing it and my shocked face and loud whispers of “Noooo baby!” just spurred you on. I tried in vain to clamp you down into my lap but you just sprinted off. There was a lot of muffled giggling as I eventually grabbed you and held on tight. After that I passed you onto daddy for the rest of the wedding. Poor Daddy.

So what else have you been doing? I’ve been trying so hard to get you to say “Mummy” that I almost didn’t notice your language has developed so much in other ways. As Daddy pointed out, you have your own words for certain things. It took me a while to realise it but I had a sort of falsetto hallelujah moment. So far the Baby Z book of words contains…

“Daaadaaa” for Daddy (or for Mummy if you’re feeling generous)

“Baaaaaabaaaaa” for Balamory (This is usually sung very loudly which is so cute. I’m actually a bit worried you’re starting to go off In the Night Garden. We are going to watch them live in August. Please like them just for a bit longer!)

Some people don’t think this is good progress. Maybe they think you should be talking like Stewie from Family Guy by now. So by next month I expect you to say “What the deuce” in the Queen’s English. Good baby.

I was reading the Babycenter emails today and it said you should be brushing your own teeth by now. You will be pleased to know you kind of do. You actually pretend for a bit and laugh. Then you eat all the toothpaste whilst keeping your mouth open because its such a strong taste. You must have a really minty fresh gut. I usually then end up brushing your teeth for you.

You’re worrying me a bit, you’ve decided food is for the weak and you just don’t need it anymore. You will either shake your head or, occasionally, even roll your eyes at me and refuse to open your mouth. I know this is a phase but it would be good if you could take after both me and your Daddy and scoff everything in sight. Well, more your Daddy than me. Obviously. Ahem.

Anyway baby, I better shuffle off to bed seeing as I still feel pretty tired after the wedding week.

Until next time baby. Mmmwah!

Not My Year Off